Steel City BIM and walkways in the sky - BIM Toolbox

Steel City BIM and walkways in the sky

Yesterday in the home of steel, Sheffield, UK and also the home of Navisworks, and me, I took part in the first ever #SteelCityBIM group. A group all about sharing ideas, best practices and networking in a city which already has a great community feel. Run by Josh Jackson at Jefferson Sheard it pulled a big crowd for the first of likely many events from across the industry. First speaker was Ryan Taylor from Arup who showed off the free BIM Maturity Tool for anyone to use. This was followed by Ian Besford from Mott MacDonald who talked us through the proposed Man Of Steel project, a 38m high statue intended to look over the M1 motorway bridging Rotherham and Sheffield, at the end of 2013 this animation came from Infraworks and was shown on local news to demonstrate the project.

Which reminds me there's been a lot of updates in 2 1/2 years, I need to run this through again!

Then it was onto me, now I present quite a lot but was getting nervous about what topic to cover in this first group and was leaving it a bit last minute. Whilst sat checking Twitter over my lunch, the perfect topic came up, a local project with a light hearted look at BIM Process.

A guy called Richard Hargate has a vision for a moving walkway across Sheffield from the train station to the main city centre, something anyone who's had to encounter Sheffield's hills will appreciate. 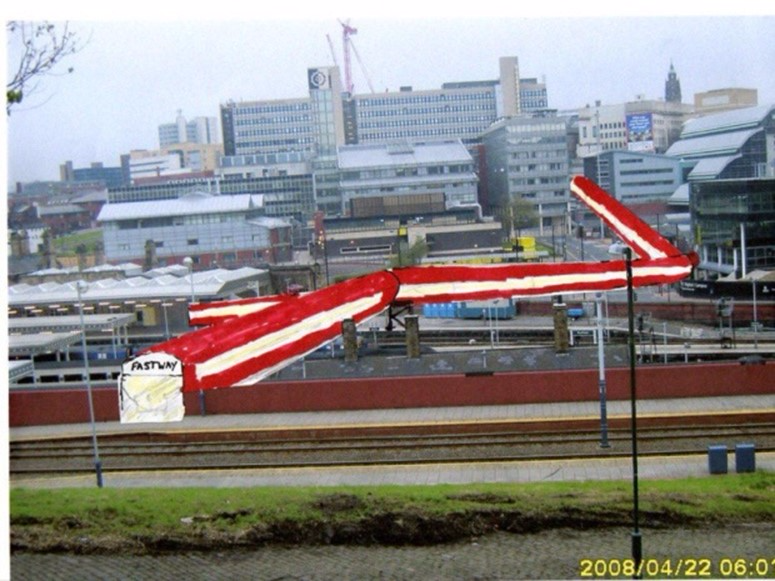 Seeing this just before 1pm and aware that I had other work to do and only 4 hours before I needed to head to the event started procrastinating! I set myself a two hour window to see how much I could get done, leaving me enough time to do what I was supposed to be doing (sorry boss). So I started in Formit 360, selected my location and brought in an aerial image for reference, then used the modelling tools to create a loft between the key points of the route, I then saved this to A360 and within a minute was able to open that same loft in Revit using the new 'Import Formit 360 to RVT' tool. I didn't do anything else there but could have got drawings, elevations or converted to a more detailed design. I saved this as an RVT file, this was then used to add to Infraworks, I already had a Sheffield model but could have used the Model Builder tool to select an area up to 200km² to bring through the terrain, buildings, rivers, roads and aerial imagery for the city. In Infraworks I simply added the Revit file to the list of Data Sources and the model dropped into the right place. I then changed the style of the existing buildings to make the walkway more obvious. Next step was to bring this model into Navisworks by exporting an FBX of the local area from Infraworks and importing the Revit file to run a quick simulation of how this would be constructed, and send it to A360 rendering for a more detailed render.

Now for 2 hours I got a few good deliverables, as you can see in the full presentation below, and found a fun way to test some of the new workflows, however as was pointed out in the evening, this may take longer than 17 days to build and may clash with existing buildings or roads! On reflection I also think the bridge tool in Infraworks may be better for this. One for a quiet day I think!

If you want to know more about Steel City BIM contact Josh.