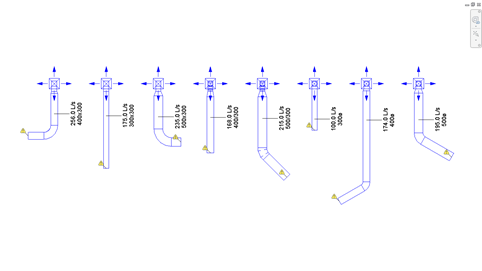 Export families are created one per duct shape, Rectangular, Oval and Round, and as Duct Accessories, as that eases the placement process.

The shape of the Export Family refers the duct it is connecting to. As the family connects to a duct I read of the Duct size and the air flow in the duct. The two values we will transfer in this example.

Import families are as the export families created one per shape of duct, but as Mechanical Equipment, again to ease the placement process.

The shape of the Import Family should indicate a connection to the Export Family, so that potential errors can be spotted visually.

There are three Dynamo scripts involved in this example:

1/ Export data; a script that reads the placement XYZ coordinates from the Export Families, the Duct Shape, the Duct Size and the Airflow, and writes them into a spreadsheet.

2/ Place Import points; a script that reads the Placement XYZ coordinates from the spreadsheet, the Duct Shape and places a corresponding Import Point of the correct shape and in the same position as the Export Family.

3/ Import Data; a script that reads the Duct Size and Air Flow from the spreadsheet and writes it to the correct Import Point.

Proof of concept can be watched here: https://www.youtube.com/watch?v=Sj-qMAMmju4